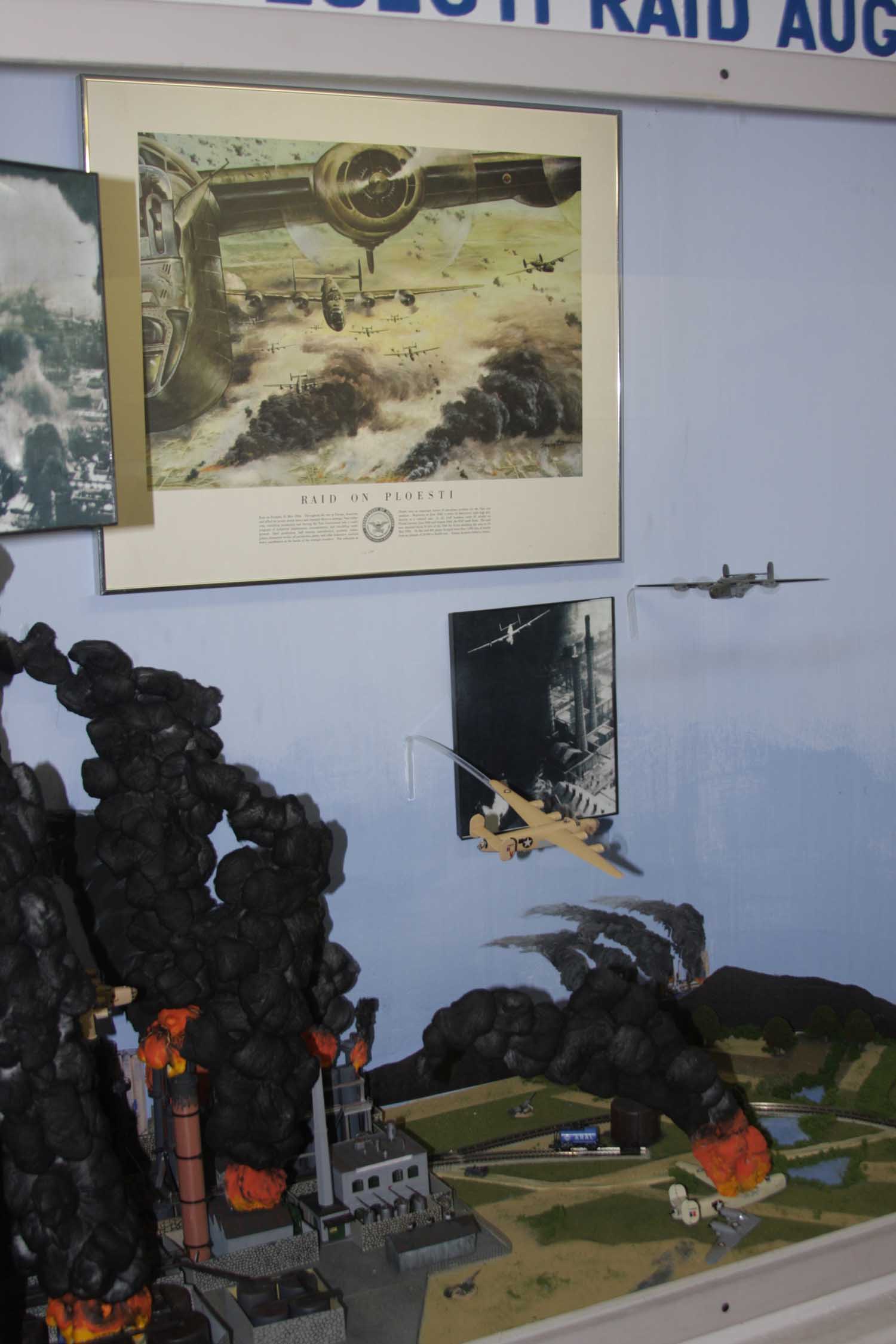 The refineries supplied an estimated sixty percent of the refined oil necessary to keep the German war machine running.   Romania supplied about sixty percent of the crude oil and other petroleum products needed with the balance coming from synthetic fuel from lignite coal.  All of this made Ploesti a very critical facility to the German war effort. With the defeat of Rommel’s Afrika Korps, the Allies moved on to attack Sicily – and then Italy itself. To support these activities, the Ninth Air Force had slowly begun to be set up in North Africa – centered on the Libyan port city of Benghazi.

The Ninth Air Force’s heavy bomber arm consisted mostly of B-24s – in contrast to the situation with the Britain-based Eighth Air Force, which was built mostly around the more famous B-17.  The B-24 was a strange and  unique aircraft. Its wings – an innovative, low-drag design – were long and narrow. They were mounted along the top (rather than the bottom) of the plane’s fuselage; the design also included a very distinctive twin-ruddered tail. The B-24 could not fly as high as its more famous cousin, the B-17. But it could carry a heavier load, and – crucially – it had a longer range. Ploesti was within range of the American air base at Benghazi.

By June of 1943, in great secrecy as “Tidal Wave,” plans were made for a strike on Ploesti during July.  The aircrews began their training – with absolutely no knowledge of what the target was that they were training to attack. But their training had one very odd feature about it. The B-24 was a four-engine strategic heavy-bomber – designed to fly to its targets at an altitude of some 20,000 to 25,000 feet. The flyers now found themselves practicing for a mission which would have them flying at very low altitude – no more than 200 feet off the ground.  It was hoped that by flying at such a low altitude and using a careful flight path, the attacking force would be able to slip in unnoticed and achieve complete surprise. In addition to taking the target area by surprise – and getting in and out before German and Romanian fighter planes could get into the air – it was hoped that a surprise, low-level attack would leave too little time for the German anti-aircraft crews to reset the air-burst elevation on their shells from high altitude to low altitude.

The first leg of the journey would carefully cross the Mediterranean to avoid German-occupied Greece – with its many islands and observation posts. Instead, the plan was to make landfall on the Albanian coast, and then to turn inland over the sparsely-populated mountains. Crossing those mountains would bring the attacking force out over Wallachian plain, where one more small turn would bring them roaring into Ploesti.  That, at least, was the plan… 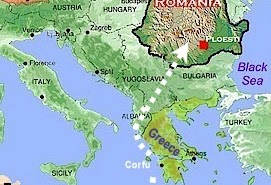 On the morning of Sunday August 1st, 1943, 178 B-24s – carrying a total of some 1780 flyers – prepared to take off for the 2700 mile round to trip to Ploesti. With the extra fuel tanks in their bomb bays, each plane carried 4000 pounds of bombs – less than a normal bomb load, but still a combined collection of more than 350 tons of explosives. The attacking force reached the Albanian coast, and made its turn inland. Not surprisingly, it was spotted by coast-watchers – who relayed that information up the command channel. At that point, it was clear that a big raid was underway, even if the target remained unknown; however, some German air defense officers already had suspicions that Ploesti might be the target. Moving inland, the attacking force would have to gain altitude to clear the mountains that ran down the middle of the Balkan peninsula. With the crest of the ridge reaching some 9,000 feet, the attacking force split into two vertical groups to keep apart. Again, things went unexpectedly wrong; the group that climbed up to 16,000 feet caught an unexpected tail wind and was wafted over the mountains, while the group that went over at 12,000 feet ran into strong head winds and was badly slowed down. Maintaining radio silence to avoid detection, the attacking force had now inadvertently been split in two.

Even more ominously, as they crossed the mountains, the lower, slower group noticed that they were being shadowed by a small group of Bulgarian fighter aircraft. Finally leaving the mountains behind, the B-24s followed the contour of the decreasing elevation of the land as they flew out over the Wallachian plain – and began to drop down to their attack altitude of some 200 feet. The target was drawing closer, but things continued to go wrong – as they always do in war.

There was one final navigation checkpoint – a small town – ahead; here, the attacking planes were to make one final small right turn and head straight for Ploesti.  Unfortunately, the navigator of what was now (due to the weather problems in the mountains) the lead element of the attack force mistook the wrong small town for the turning point; turning too soon, the first half of the attack force turned and headed directly for Bucharest – rather than for Ploesti. 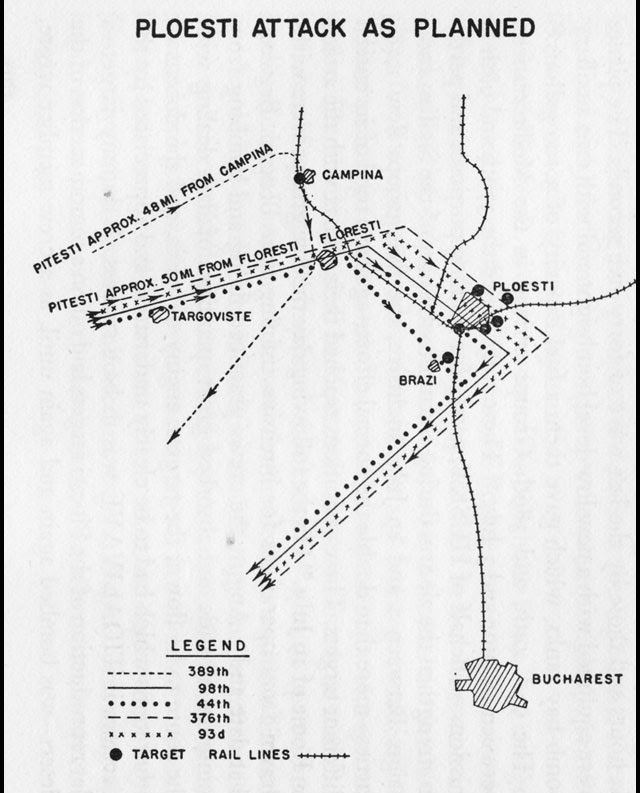 When what was now the second part of the attack force came along, they picked out the correct ground checkpoint, and headed (properly) for Ploesti.

As the lead force roared low over the flatlands toward Bucharest, they began to encounter the unexpectedly-thick concentrations of anti-aircraft guns – and B-24s began to fall from the sky. Visibility was restricted at that low altitude, but when the skyline of Bucharest – rather than of Ploesti – came into view ahead, the navigational error became cruelly apparent. Improvising and using their maps well, the pilots turned their B-24s in a sharp left turn – intending to follow the rail line running north from Bucharest, to guide them right into Ploesti. But now they would be coming at the target from a completely unexpected direction – and were now not properly lined up for their intended targets.  After all of these difficulties and problems, around noon the B-24s coming up from the south finally began to reach Ploesti. An atrocious and heart-rending 30 minutes was about to begin.

As the B-24s approached Ploesti, the anti-aircraft fire they faced – and the losses they suffered – grew worse and worse. Unable to properly find their intended targets and with no opportunity to set up as planned, the order went out to aircraft crews to attack whatever “targets of opportunity” presented themselves. So the lead wave of aircraft attacked whatever targets seemed most suitable.  Meanwhile, what was now the trailing force was rapidly closing in on Ploesti from the west, as planned – coming into the target at right angles to the direction taken by the improvising lead force.  As the “trailing force” flyers approached Ploesti, they were surprised to see low clouds and rain over the target – the meteorologists in Benghazi had assured them that fine weather prevailed over southeastern Europe. It was only as they drew closer that they realized that the “low clouds and rain” were actually the acrid smoke rising from the strikes of the inadvertent lead force.

Due to the navigation errors and the “targets of opportunity” order, the lead force actually attacked many of the targets that had originally been assigned to what became the trailing force. The trailing force aircraft were now going to have to try to find their targets through the smoke and fire left by the lead force – and do this while the aircraft of the now-exiting lead force were zipping across in front of them from right to left.

By now, the carefully planned and well-thought-out plan-of-attack against Ploesti had turned into total chaos. Coming in low, many of the B-24 gunners fought virtual duels with anti-aircraft gun crews on the ground only some 200 feet below. The heat from the fires was so intense that many pilots, strapped to their seats in their cockpits, had the hair singed off their forearms. 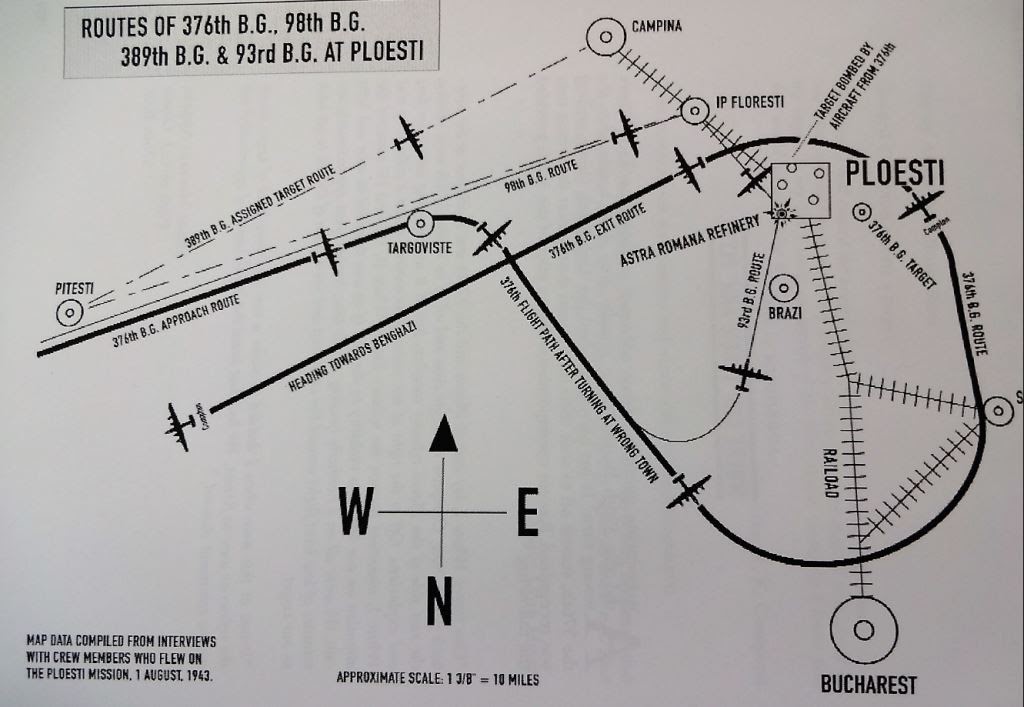 By 12:30 scarcely 30 minutes after the attack had begun the last bombs were dropped into Ploesti. The surviving B-24s fled west with all the speed they could muster for the long voyage back to Benghazi. It was evening before the surviving B-24s began to reach Benghazi, landing as best they could. Many of the planes had flown so low that back in Benghazi it was discovered that they had cornstalks stuck in their bomb bays.  It was only after the last planes had landed that the total cost of the Ploesti mission could be tallied.

Of the 178 B-24s that had taken off from Benghazi that morning, 164 had managed to reach the target area. Of these, 41 were lost due to enemy action. Six aircraft had been lost due to non-combat-related causes, while 8 others were in neutral Turkey – where they and their crews were to be interned for the remainder of the war. In addition, 23 B-24s had landed – in various states of disrepair – in Malta, Sicily, and Cyprus. Of the aircraft that had managed to make it back to Benghazi, fewer than 30 were now airworthy. In total, 310 American airmen were killed in the attack. The official tally counted 50 wounded – but that did not include airmen who were now either interned in Turkey or prisoners of war in Romania. In total, some 100 surviving airmen were taken prisoner on the ground in Romania, and spent the rest of the war as POWs there.

The flames and smoke produced during the attack had given the impression that the attack had been a great success. But sadly, this was actually not the case. Much of the smoke and flame had come from the ignition of storage tanks that held finished products – not from the destruction of the main capabilities of the facility itself. The Ploesti complex had indeed been hit hard – and it was badly damaged. But the damage was reparable – and by that time, the Germans had available as labor a nearly limitless pool of POWs from the eastern front. The damage at Ploesti was rapidly repaired, and the complex remained in operation until it was overrun by advancing Soviet troops – in August 1944, a year after the American raid. 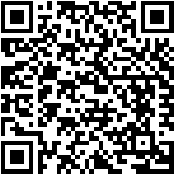