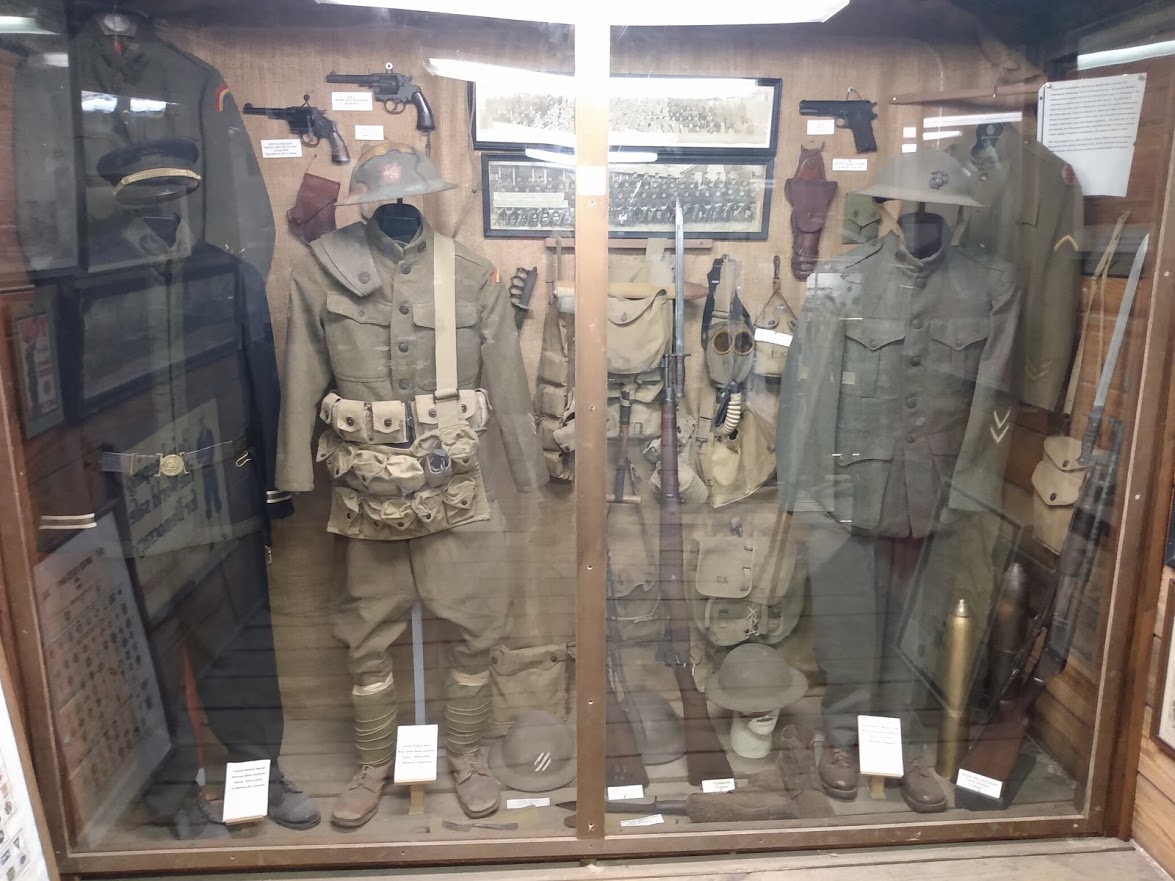 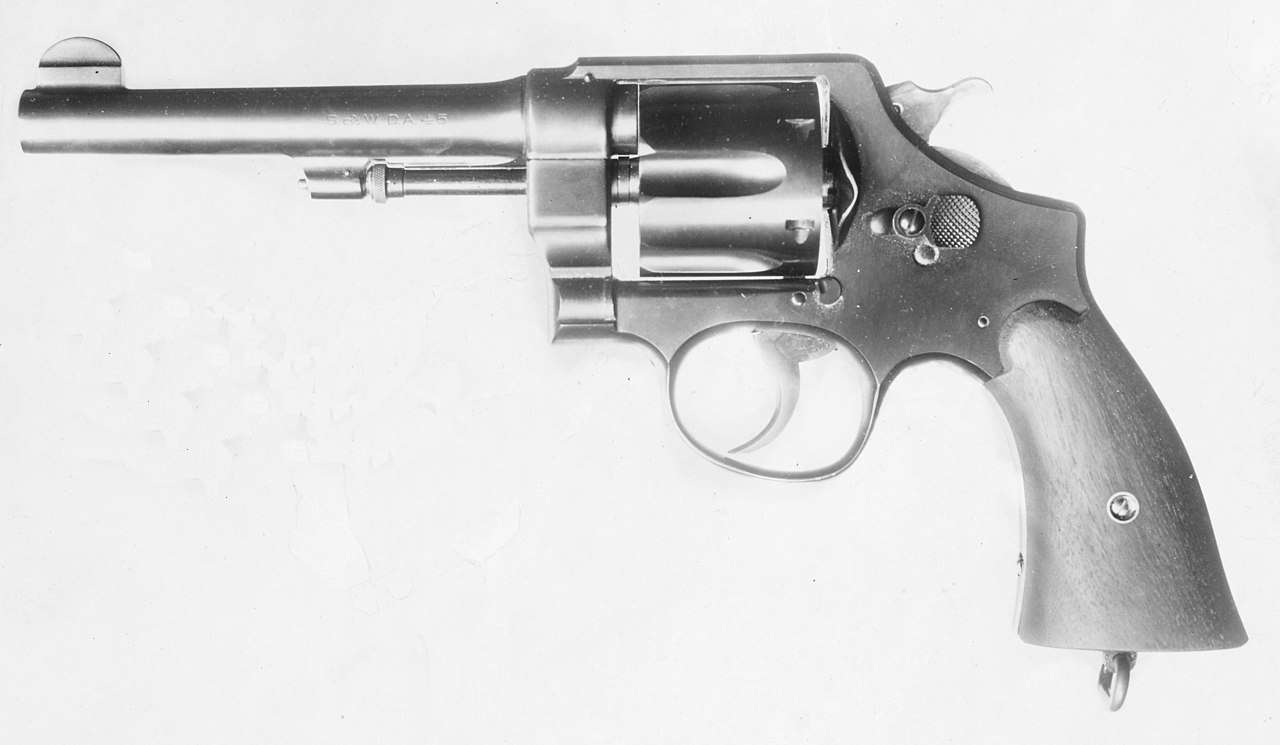 The .45 caliber M1917 Smith and Wesson Revolver was a six-shot large frame revolver adopted by the US Army during World War 1 to supplement the limited supply of the standard M1911 Colt semi-automatic pistol. The M1917 was built by two well known manufacturers, Smith and Wesson and Colt. The M1917 fired the .45 caliber rimless cartridge used in the M1911 semi-automatic pistol. In the case of the revolver, firing a rimless cartridge required the use of what were referred to as “half-moon clips” which held the shells in place for loading and ejection of spent cases. The M1917 Smith and Wesson revolver is an adaptation of the company’s .44 caliber hand ejector model cambered for .45 with a shortened cylinder and a lanyard on the bottom of the grip. The Smith and Wesson Model 1917 can be distinguished from the Colt 1917 Model by the shoulder machined into the cylinder which allows the rimless .45 cartridges to headspace on the case mouth. During 1917 until 1919, slightly over 150,000 Smith and Wesson M1917 revolvers were procured by the US War Department. The M1917 Revolver’s service life continued after World War I. This revolver was also used in World War II, the Korean War and Vietnam. 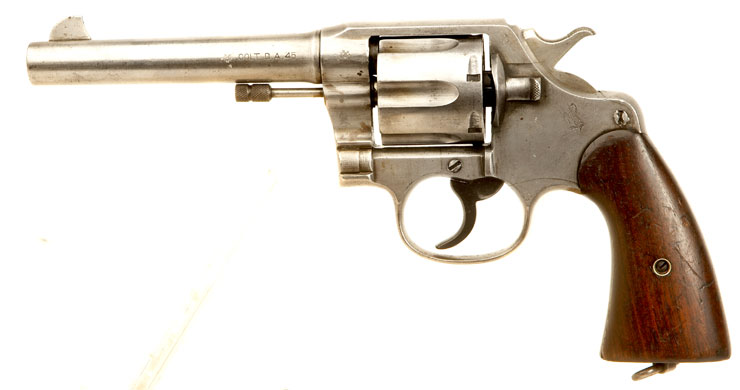 The Colt M1917 Revolver was very similar to the M1909 .38 Caliber Revolver but modified to accept the larger .45 cartridge. The Colt revolver required the use of half-moon clips to hold rounds in the cylinder in position. When fired without a half moon clip, the rounds in the cylinder could slide forward and away from the firing pin. Later model Colt M1917 revolvers were modified to overcome this shortcoming of the design. Colt produced over 150,000 revolvers for military use. The Colt model of the M1917 revolver was favored over the Smith and Wesson. 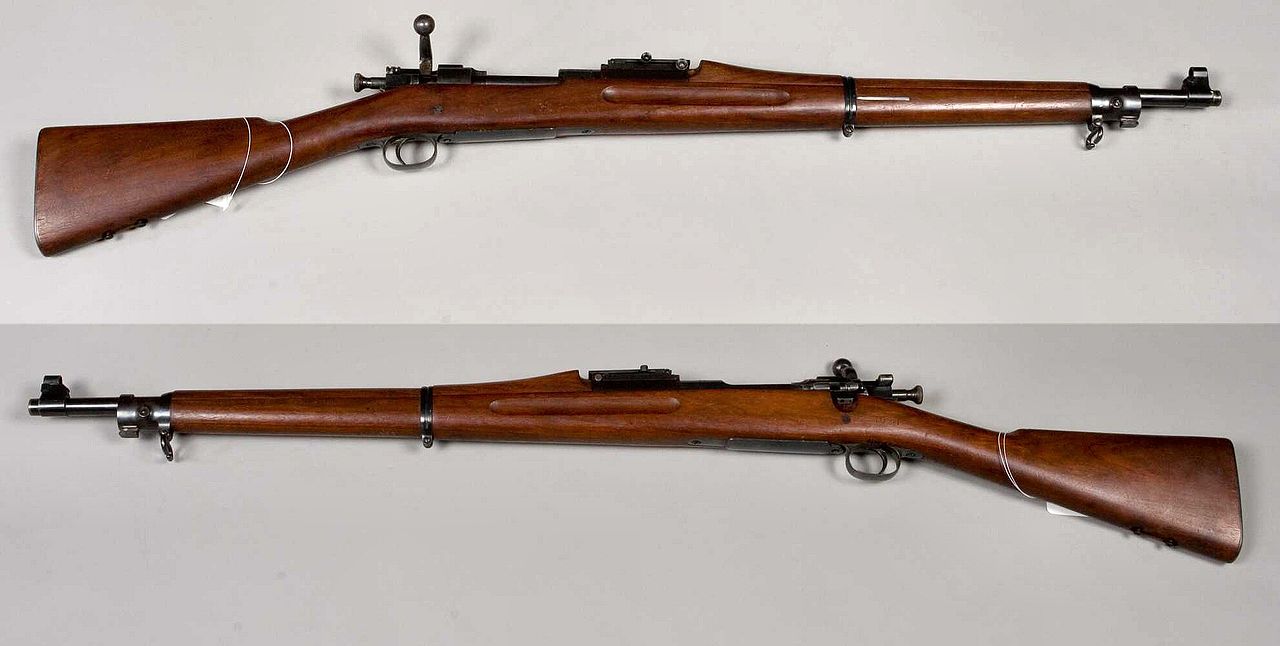 The Springfield 1903 .30 caliber rifle is an American made 5-shot bolt action rifle used heavily during the first half of the 20th century. The rifle was formally adopted in 1903 and this is part of its model designation. Its development was intended to address the shortcomings of earlier single shot rifles employed by the US Military at great disadvantage such as the Springfield Model 1892–99 Krag–Jørgensen bolt-action rifles which were slow to reload.  These rifles were outclassed by more modern designs such as the M1893 Mauser. Some features of the Springfield 1903 are so similar to the Mauser design that Springfield was sued by Mauser Werkes which was awarded damages. The Springfield 1903 fires the .30-06 cartridge which is accurate at long range. The rifle was known for its reliability and accuracy. US Marines used M1903 rifles at Guadalcanal until there were replaced by the more advanced M1 Garand. The Springfield M1903 A4 variant was the US Army’s rifle of choice during World War Two and had a range of about 500 meters. 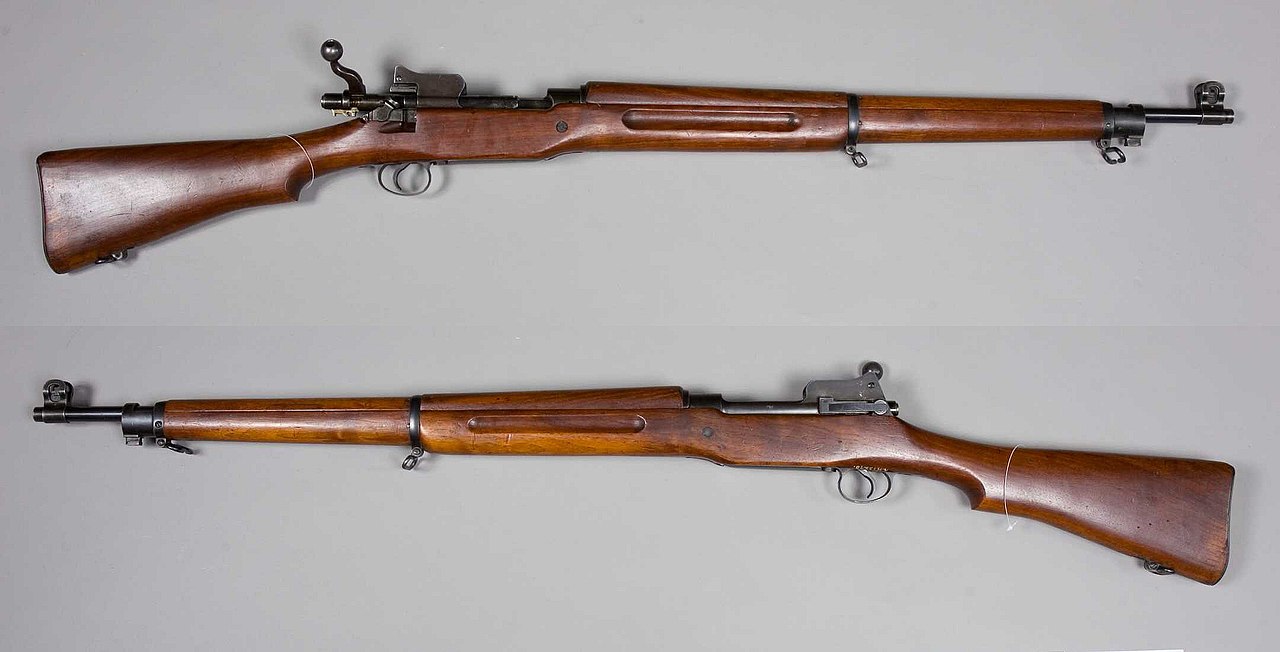 The Model 1917 Lee Enfield Rifle is an American version of the British 1914 .303 rifle. This was the main rifle used by American Expeditionary Forces in Europe during World War I. These rifles were manufactured at arsenals in the United States that had previously built Lee-Enfield rifles for Britain under contract. Rather than re-tool, the US manufacturers started building the same design to satisfy US demands for rifles. The 1917 Lee Enfield was produced in addition to the Springfield 1903 rifles to arm infantry for World War I. The US manufacturers adapted the US version of the Lee Enfield to utilize the .30-06 cartridge to simplify ammunition logistics. The Lee Enfield design with its strong action was well suited for this large cartridge.  The 1917 Lee Enfield utilized the M98 Mauser bolt action design and was fed by a five round internal magazine. Particularly notable in the M1917 as well as the British Pattern 14 rifle is the configuration of the rear sight. Unlike many other common rifle designs, the rear sight is located on the rear section of the receiver instead of the typical location forward of the bolt assembly. This gave the rifle a longer sight radius and enhanced accuracy. The rear aperture sight was protected by large ears and was a feature carried over into the design of the M1 Garand and the M1 carbine. The M1917 had an effective range of about 600 yards.

Note: The M1917 Rifle was used by Sergeant Alvin C York during his famous actions for which he was awarded the Medal of Honor. 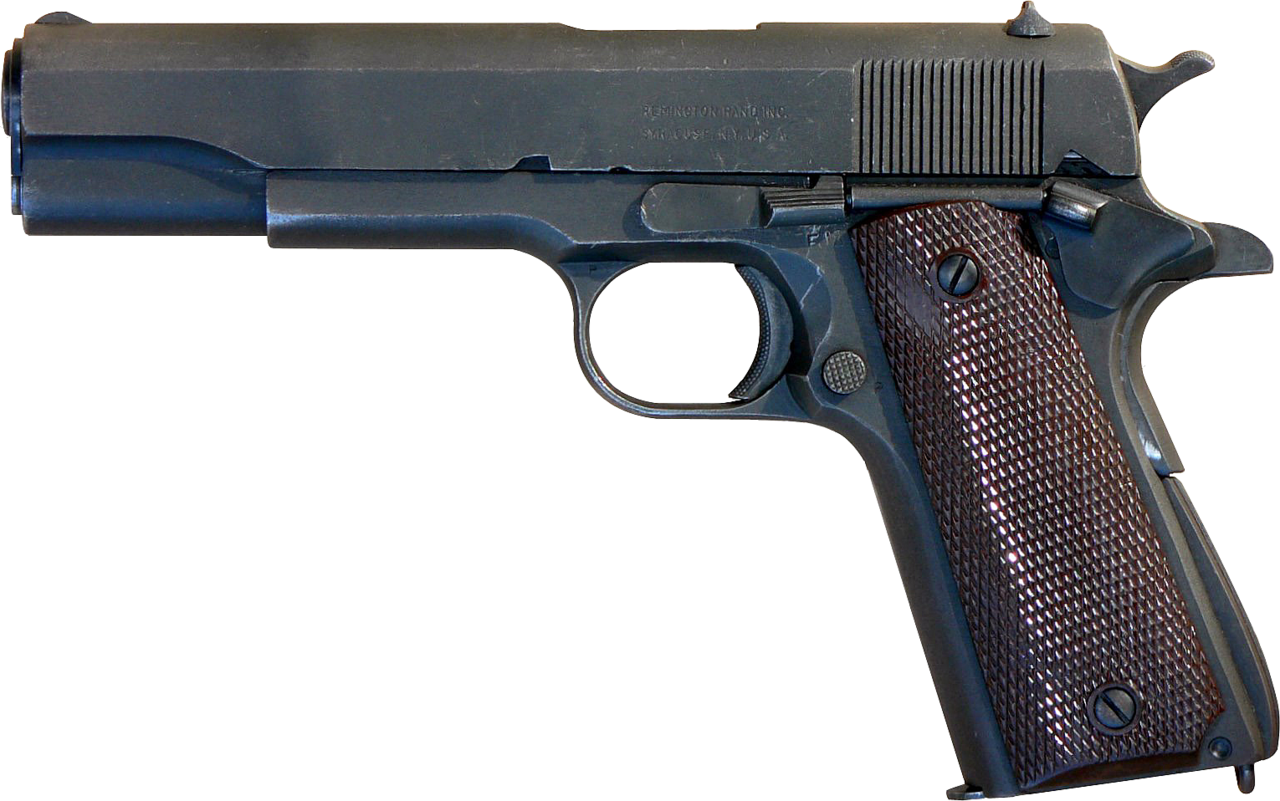 The Colt Model 1911 is a semi-automatic single action magazine fed pistol chambered for the .45 ACP cartridge. These pistols were the standard issue sidearm of US military forces from 1911 until 1986 and were used in World War 1, World War II, the Korean War and Vietnam. Approximately 2.7 million were produced during its service life. The 1911 was eventually replaced by the Beretta M9 9mm pistol. Variants of the 1911 are still in active use by the US Armed Forces. The M1911 was designed by John Browning in the 1890's and has been widely copied in many other pistols. The .45 caliber cartridge was found to have better stopping power than smaller calibers such as the .38. During initial trials in 1910, a Colt 1911 was able to fire 6,000 rounds without stoppage over the course of two days. The Colt was formally adopted by the Army in 1911. This first version of the M1911 was used in World War I. Battlefield experience during this time led to a series of improvements and modifications which led to the development of the M1911 A1, however, the original 1911 and the 1911 A1 are almost indistinguishable and have no significant internal changes. 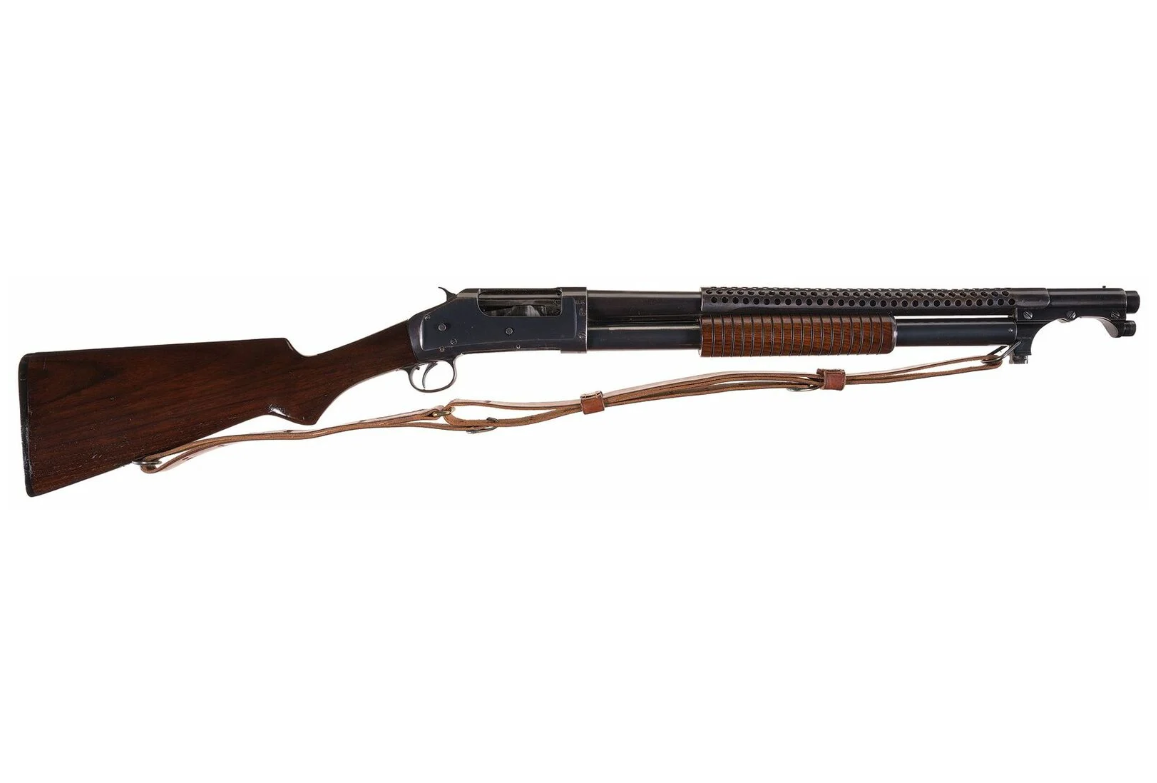 The Winchester Model 1897 Trench Shotgun is a pump action 12 gauge shotgun with an external hammer and a tubular magazine. The Winchester Model 1897 was designed by American firearms inventor John Moses Browning. The Model 1897 was conceived as an evolution and an improvement of the Winchester 1893 shotgun. The Model 1897 is a "take down" design which is standard in modern pump shotguns such as  the Mossberg 500. The Winchester Model 1897 was produced from 1897 until 1957 and was very popular and considered an extremely effective weapon for police and military use. The shotgun is designed to fire 12 gauge 2 3/4 inch shells. The tubular magazine can hold six rounds. The Model 1897 Shotgun lacks a trigger disconnector. This feature allows the user to fire the weapon by holding down the trigger and cycling the pump mechanism. This method of rapid fire allows a skilled operator to fire an entire magazine load of ammunition very quickly, generating immense firepower. Military versions of the Model 1897 had a bayonet lug and incorporated a perforated steel heat shield over the barrel to protect the soldier’s hands from a hot barrel. The Trench model was equipped with a 20-inch cylinder bore barrel and typically fired 12 gauge 00 buckshot. It has been said that American soldiers who were skilled at  trap shooting were armed with these guns and stationed where they could fire at enemy hand grenades in midair. It is interesting to note that when the Trench Shotgun was first introduced in WW I, the Germans protested claiming use of the weapon was unethical according to the 1907 Hague Convention on Land Warfare. Other military uses of the shotgun included the execution of security/interior guard operations, rear area security operations, guarding prisoners of war, raids, ambushes, urban warfare, and selected special operations. The Model 1897 remained popular after the conclusion of WW I and was used by the US Army and the Marine Corps in WW II, the Korean War and in Vietnam. Over 1 million Model 1897 Shotguns were produced. 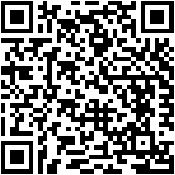