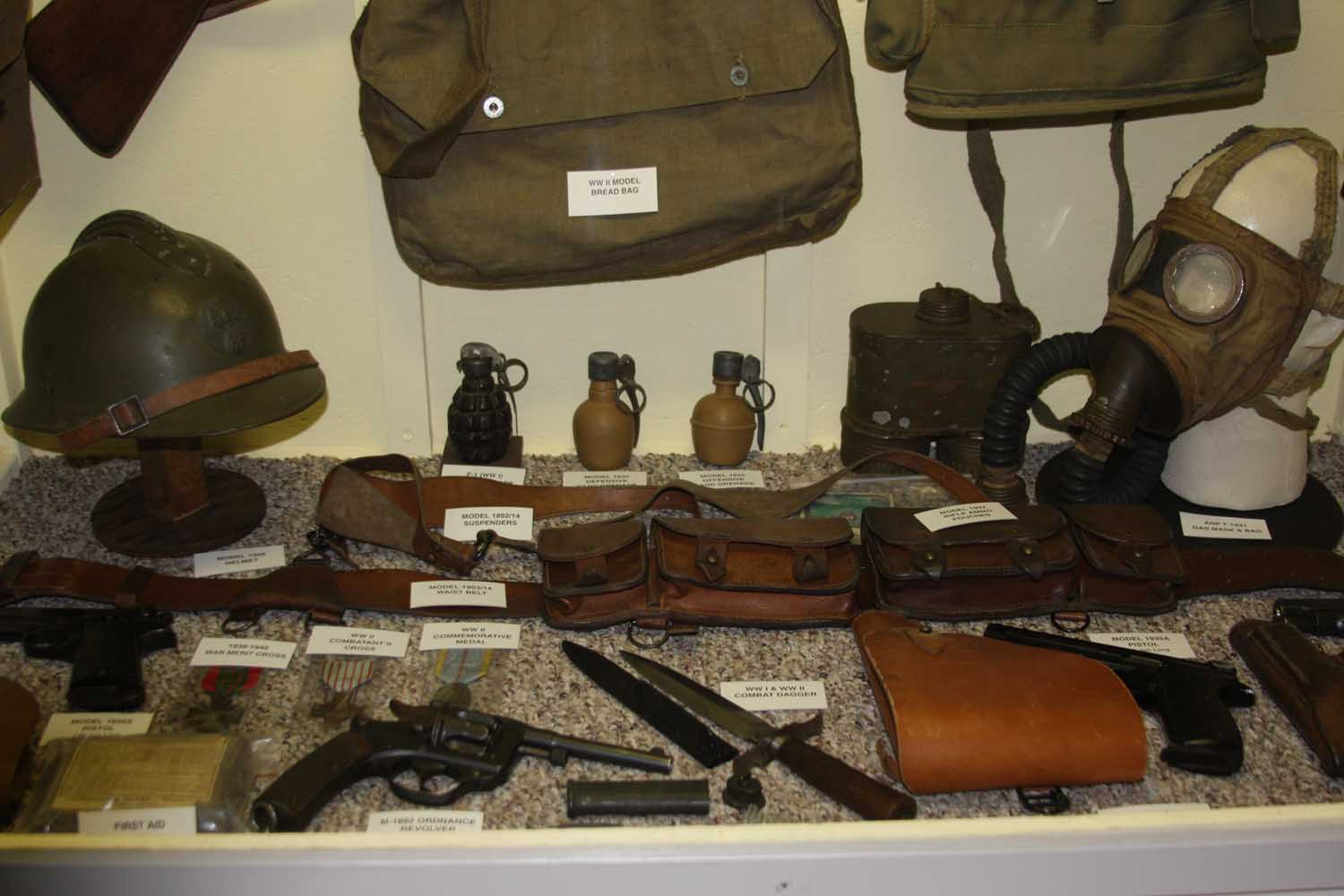 The Carcano Model 1938 Rifle is an Italian bolt action magazine fed rifle. The design for the rifle was developed in 1891 by the chief technician Salvatore Carcano at the Turin Army Arsenal.  It was produced from 1892 to 1945.  It was used by most Italian troops during the First World War and by Italian and some German forces during the Second World War.  The Type I Carcano rifle was produced by Italy for the Japanese Empire prior to World War II. The rifle depends for proper usage upon a magazine system using en bloc charger clips which were originally developed and patented by Ferdinand Mannlicher, but the actual shape and design of the Carcano clip is derived from the German Model 1888 Commission Rifle.  The M1938 was chambered for the rimless 6.5×52mm Modello 1895 cartridge, using a round-nose metal case bullet of 160 grains weight at approximately 2,000-2,400 ft/s muzzle velocity.  Over 54 million were produced.  Either full or partially loaded clips may be inserted through the open action.  When the clip is pressed down fully on the follower, a spring-loaded catch located in the rear of the box magazine secures the clip in place.  After all cartridges have been fired, the empty clip drops out through the open bottom of the magazine.  German forces captured large quantities of Carcanos after Italy's capitulation in September 1943.  It was commonly issued  to the German Volkssturm units in late 1944 and 1945.  Large quantities of  surplus Carcano rifles were sold in the US and in Canada in the 50's.

Lee Harvey Oswald purchased one of these rifles in 1963 for $20.00.  The serial-numbered C2766 rifle, sent to Oswald was a surplus rifle advertised as "Italian carbine" in 1963, was a short infantry rifle of this type.

The Model 1938 Carcano Carbine is a shortened, handier version of the full length rifle.  The carbine featured a half stock assembly, and a shortened barrel. The bayonet was attached to a swivel so it could be folded back. The carbine was intended to be used by mounted infantry.

The MAB 38 Moschetto Automatico Beretta Modello 1938, Modello 38, or Model 38 was a submachine gun of the  Royal Italian Army introduced in 1938 and used in WW2. It was designed by Beretta's chief engineer Tullio Marengoni in 1935. The MAB is regarded as the best Italian submachine gun of WW2 and was produced in large numbers.  The MAB 38 was a well made weapon, finely crafted and was highly reliable and very effective in combat.  It was initially made available to police, paratroops and special army units and the Polizia dell'Africa Italiana (Italian Africa Constabulary), but eventually was widely available to all Italian military forces.  The M38 provided high firepower for elite forces in close quarter combat. The M38 fired a powerfully loaded Italian version of the widely distributed 9×19mm Parabellum cartridge, the Cartuccia 9 mm M38 which provided it's effective range of up 200 yards which was superior to most other similar submachine guns of the period.  The M38 was heavy which was advantageous in that it made the weapon more stable when firing fully automatic.  The M38 did not have a selector switch for selecting mode of fire, but had an unusual arrangement of two triggers, one for select fire, and one for full auto.  The M38 can be recognized by its machined steel receiver, fine finish and workmanship and by the perforated cooling jacket over the barrel. The M38 had a cyclic rate of 600 rounds per minute and was fed by 10,20,30 and 40 round magazines which were typically carried in a magazine vest worn on the chest similar to Chinese made AK magazine vests.  Captured versions of the the M38 were also very popular  with Axis and Allied forces. The Beretta MAB was regarded as more powerful and accurate than the British STEN. 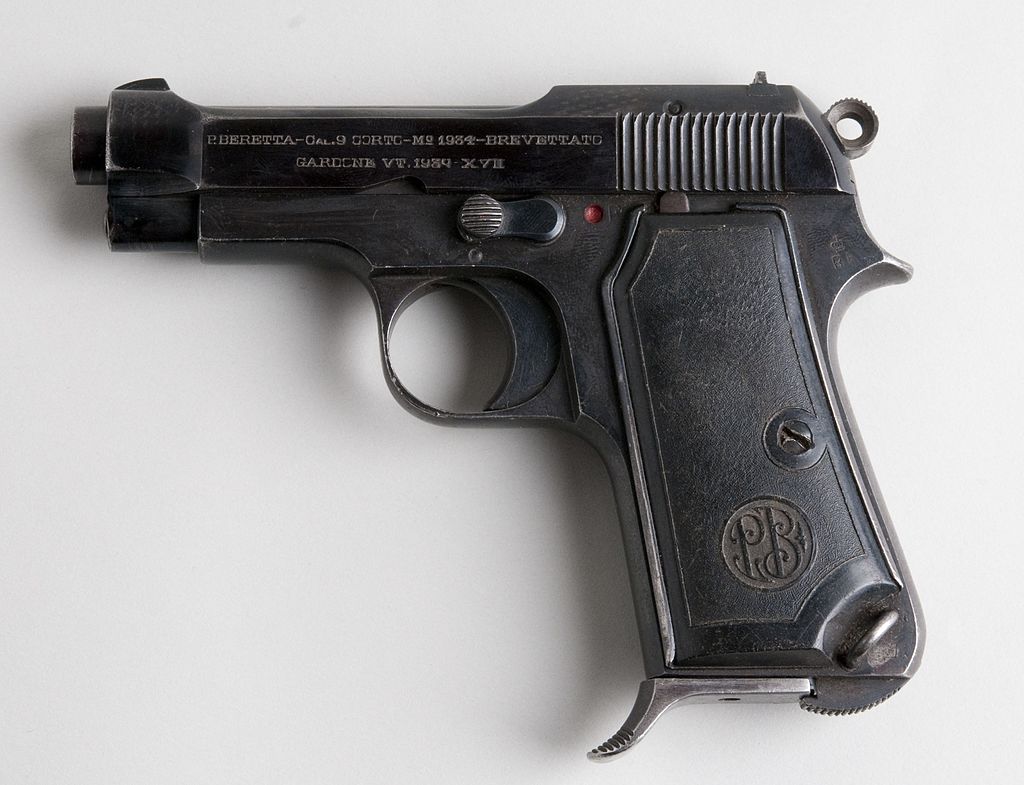 The Beretta Model 1934 Pistol is a compact semi-automatic pistol chambered for the 9mm Corto (.380 ACP).  Beretta is a famous firearms manufacturer with a history reaching back to the 1500's.  They produced their first pistol, the model 1915 in that year.   The Model 1934 was the their most widely produced pistol during World War Two.  The model 1934 was designed and produced for the Italian Military.   The M1934 is fitted with the characteristic Beretta open slide. The M1934 has a very reliable feeding and extraction cycle.  The elongated slot in the top of the slide acts as the ejection port.  It is made with relatively few parts and is very simple to maintain.  The M1934 is very robust in construction with a long service life if properly maintained.  The 9MM Corto is less powerful than  the 9mm Parabellum or .45 ACP. 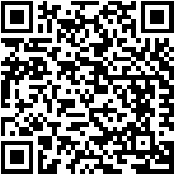