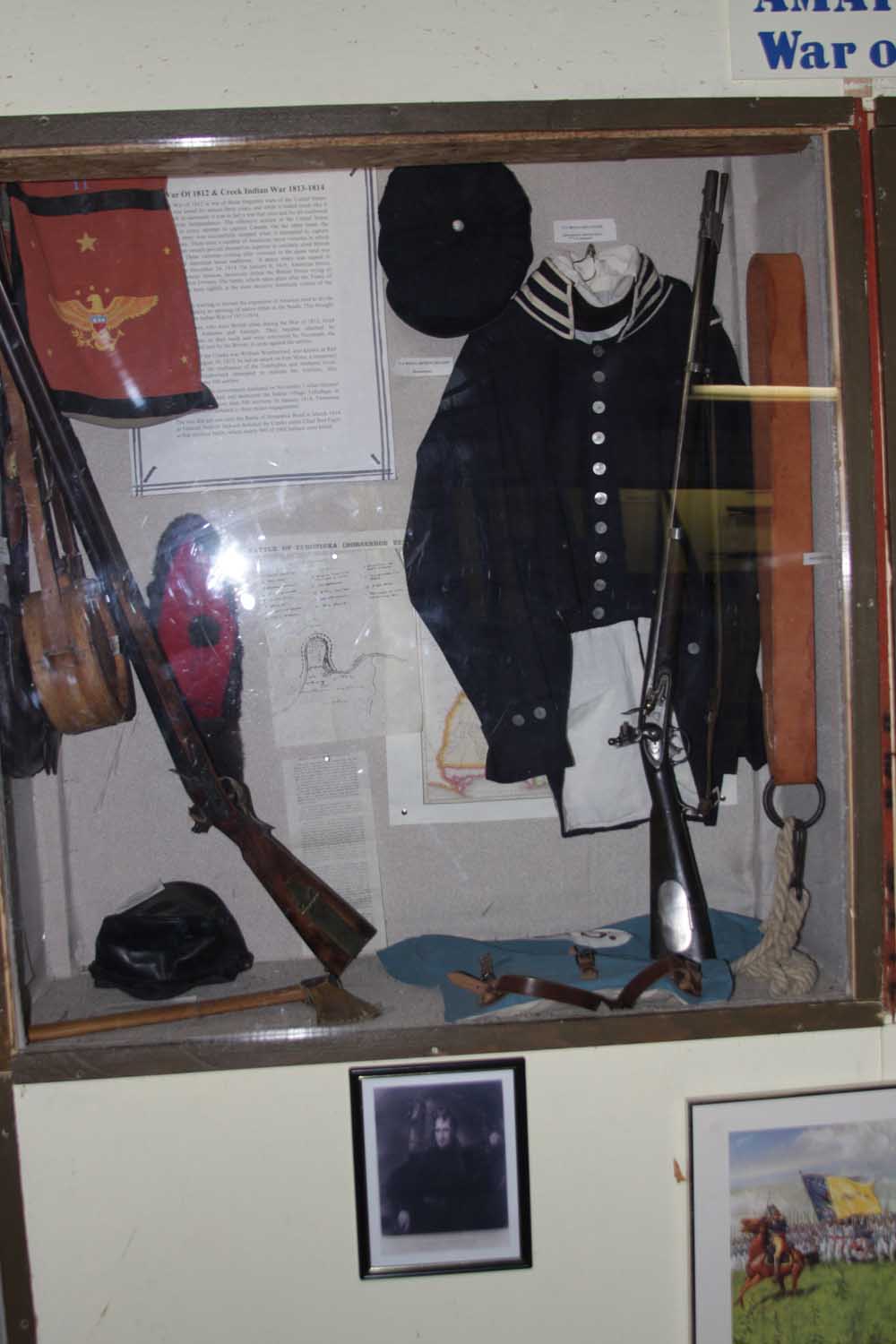 The United States entered the War of 1812 determined to conquer Canada.   Four separate, uncoordinated offensives were envisaged.   The main army was to advance up the old Lake Champlain invasion route to capture Montreal.  Three other columns, composed chiefly of militia, were to invade  Canada from Detroit, Niagara peninsula, and Sacket's Harbor. There were few competent commanders or trained soldiers or supplies available. However, England was desperately engaged with Napoleon and could not spare reinforcements for Canada. The local British forces could only await the American attacks, meanwhile stirring up the Indian tribes along the frontiers. 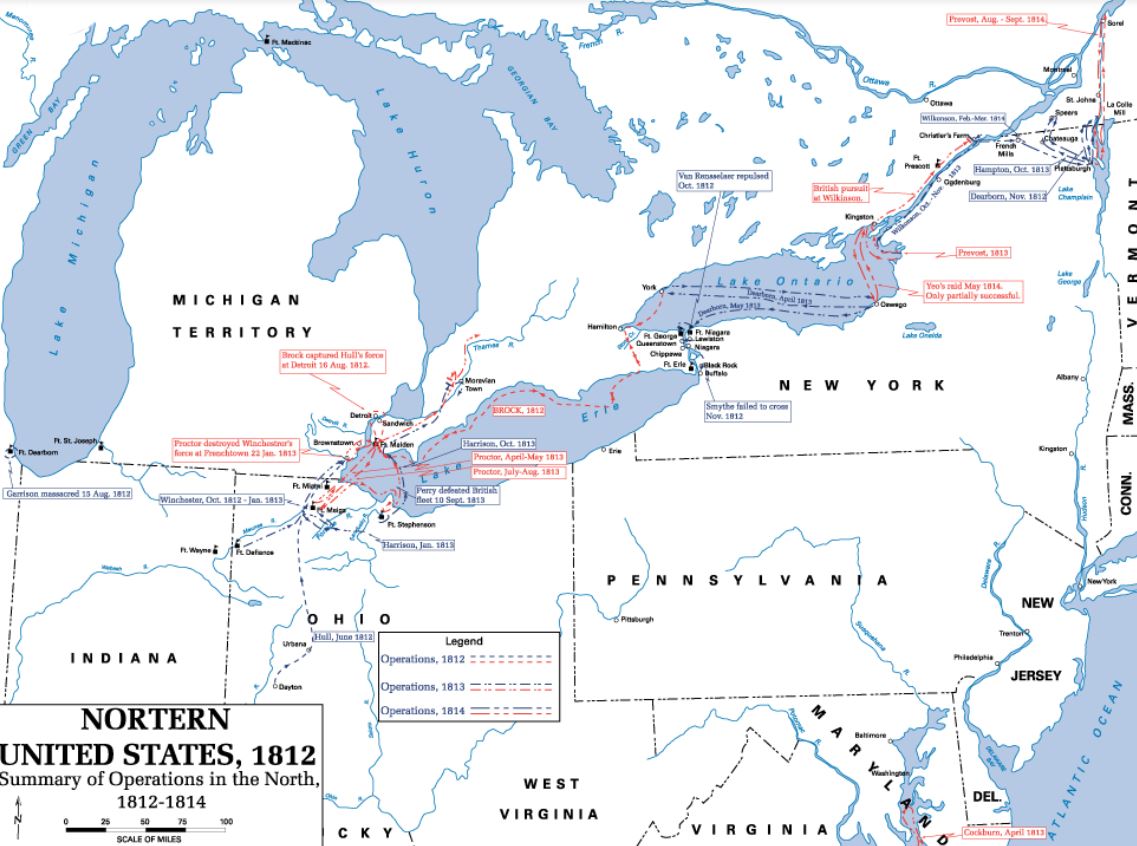 The advance from Detroit was assigned to William Hull, the aging governor of Michigan Territory.  After constructing 200 miles of road from Dayton, Hull reached Detroit and crossed the Detroit river in to Canada and approached British Fort Malden, but he did not attack. When Indians began to raid his line of supply, he returned to Detroit. Meanwhile British Brig. Gen. Brock sailed to the relief of Fort Malden. He arrived after Hull had returned to Detroit, followed him there, and bluffed him into a disgraceful surrender.  The capture of Fort Mackinac by local forces and the massacre the of Fort Dearborn (Chicago) garrison completed the American defeat in the west.  Brock returned to the Niagara frontier.  Nothing came of the three other contemplated advances.  At Niagara, the Americans made a surprise night crossing and captured the heights at Queenstown.  But the American militia refused to follow across the river, leaving the advance guard to be overwhelmed and captured. Maj. Gen. Henry Dearborn advance up Lake Champlain, marched twenty miles to the Canadian border, then marched back. The proposed advance from Sacket’s Harbor never materialized.  Maj. Gen. William Henry Harrison organized a numbers of columns of militia and made several unsuccessful efforts to retake Detroit. Land activity was suspended by the Americans until Commodore Oliver Hazard Perry completed construction of his fleet and defeated the British navy on Lake Erie. Perry then ferried Harrison's troops across the lake. The British withdrew to the north, but were overtaken and routed at Moravian Town. This action ended serious fighting in the west. 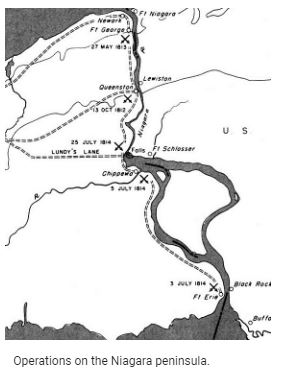 In the east, instead of moving to Montreal according to plan, the Americans crossed Lake Ontario, raided York, and then turned to attack Fort George on the Niagara peninsula. Though initially successful, this offensive collapsed. The British countered with an unsuccessful raid on Sacket's Harbor.

American Gen. Wilkinson proceeded down the St. Lawrence toward Quebec, expecting to be joined en route by Maj. Gen. Wade Hampton's troops advancing north from Plattsburg on Lake Champlain.  At Christler's Farm, the Americans suffered a humiliating defeat at the hands of a small British force. The British force then withdrew and went into winter quarters. American Gen Hampton did likewise.

In December, the Americans forces evacuate Fort George on the Niagara peninsula. For no apparent reason, the retreating Americans burned Queenstown and nearby Newark. The British retaliated by ravaging a thirty-mile stretch of the American border, burning Buffalo, Black Rock, and several smaller towns. They also captured Fort Niagara, which they held to the end of the war.

In early 1813, British Admiral George Cockburn carried out a series of punitive raids along the Chesapeake Bay .  Repulsed at Norfolk, he retaliated by brutally sacking the Virginia town of Hampton.  In March, 1814, Wilkinson fought his last battle.  His attack at La Colle Mill with 4,000 men and was repulsed by a British outpost of 200 men.

The British constructed a superior fleet and gained control of Lake Ontario. They successfully raided Oswego, New York, but failed to attack the main American depot some twelve miles inland.  Following their pointless raid on York, American General Dearborn and Commodore lsaac Chauncey launched in May, 1813, a successful attack to capture Fort George. To avoid being cut off,, Brig. Gen. John Vincent withdrew his British force west to Hamilton.  After much vacillation American forces, under Brig. Gen. Henry Winder and Brig. Gen. John Chandler, began a pursuit. About ten miles east of the city they made camp for the night, neglecting to establish outposts. Vincent and a small force made a surprise night attack on the exposed camp.   In the melee that followed, both sides lost heavily; Winder and Chandler were captured. The British retreated to Hamilton and the American to Fort George. Dearborn then withdrew from Fort George leaving a small garrison of militia. Fearing an attack by the British, the militia later burned Newark and Queenstown, crossed the river, and returned to their homes. In retaliation the British surprised Fort Niagara and ravaged the American side of the river.

Operation were resumed on the Niagara front in July, 1814, when American Gen. Brown's small but well-trained army captured Fort Erie. The Americans advanced north to Chippeaw, where Brig. Gen. Winfield Scott's brigade defeated the British, under Maj. Gen. Phineas Riall, in a brief but fierce battle. Brown then pushed the British back toward Fort George. However finding them reinforced he retired to Chippewa.  British Gen. Sir Gordon Drummond now prepared to advance on the east bank from Fort Niagara. Brown, worried about this threat to his communications, sent Scott toward the British position at Queenstown to force the British to concentrate their troops on the west bank of the river. Scott's brigade collided with Drummond’s advance guard at Lundy's Lane.   A savage five-hour battle developed in which Americans Gen. Brown, Americans Gen. Winfield Scott, British Gen. Drummond, and British Gen. Riall were all wounded. The Americans withdrew to Fort Erie, which they hastily strengthened. Drummond followed cautiously and began a formal siege.  On 3 August, a British raid on the American supply depots at Black Rock was routed by American riflemen. An assault on Fort Erie on 14 August was repulsed with heavy losses. On 17 September, Brown made a successful sortie; Drummond withdrew a few days later.   In October, Maj. Gen. George Izard and over 6,000 troops arrived to aid Americans Gen. Brown. He advanced on Chippewa with an excellent chance of overwhelming British Gen. Drummond, but suspended operations upon learning that Commodore Chauncey had retired into Sacket's Harbor.  Fort Erie was therefore abandoned on 5 November, and the Americans went into winter quarters near Buffalo.

A First element of the British plan

With the fall of Napoleon in April, 1814, enabled the British government to shift large forces of veteran troops to North America.  Several offensives were envisaged, including one along the Lake Champlain route. The Americans, preoccupied with operations on the Niagara front, had left this route practically open. In August, Sir George Prevost, Governor General of Canada, with a splendid army of 11,000 men and a strong fleet, began an advance. His only immediate opposition on land was a force of about 1,500 American troops, under Brig. Gen. Alexander Macomb, in a strong line of defenses at Plattsburg.  However, when Commodore Thomas Macdonough's small fleet defeated the larger British fleet in a hard-fought battle in Plattsburg Bay, Prevost returned precipitously to Canada. Thus ended major operations in the north.

A second element of the British plan for 1814 was a series of raids along the eastern sea board principally against Washington and Baltimore. The defenses of Washington had been sadly neglected.  In July 1814, President James Madison created the Potomac Military District and placed General Winder in command.  Winder displayed the same ineptitude that had marked him on the Canadian frontier. Some militia was called up, but no fortifications were constructed or planned. In August, Maj. Gen. Robert Ross' British troops, escorted by Admiral Sir Alexander, Cochrane's fleet, arrived off Benedict on the Patuxent River, Confronted with an overwhelming enemy fleet, Commodore Joshua Barney destroyed his small American flotilla of gunboats in the upper Patuxent and marched his sailors and marines to join Winder. The latter, in a high state of confusion, marched and counter marched his troops until he learned that the British were on the road to Blandsberg; then he rushed to interpose  himself between the British and Washington. In the Battle Blandsberg that followed, Barney's men and some of the militia fought stubbornly; the former even counterattacked successfully. But the unseasoned American militia broke and fled. The British burned most of the public building in Washington and then withdrew.   The British then moved against Baltimore. The Maryland militia worked diligently to fortify the town. When the British landed at North Point, The Maryland militia moved forward to delay their advance. In an engagement at Godly Wood, The British inflicted heavy losses on the Maryland militia which withdrew back to Baltimore. A reconnaissance of the Baltimore defenses convinced the British that the fortifications could not be taken without the aid of the fleet to force the entrance to Baltimore. An attempt by the fleet to force the entrance to Baltimore harbor failed whereupon the entire British expedition sailed away. 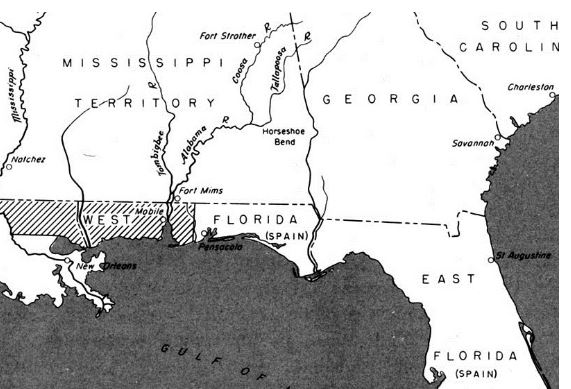 The third element of the British plan contemplated the capture of New Orleans. Maj. Gen. Andrew Jackson had been engaged in suppressing Indian uprisings in the south. A small British force established itself at Pensacola, Florida, and proceeded to arm and supply the Indians gathering there. Jackson seized Pensacola, and then moved west toward New Orleans, leaving most of his regulars at Mobile. At New Orleans, he learned that the British had arrived and had overwhelmed his little squadron of gunboats on Lake Borgne. With characteristic energy he declared martial law and assembled all available forces -mostly militia, stiffened by a handful of regulars, sailors, and the pirates and smugglers.  He made a furious night attack on the advancing British columns, but was repulsed. Jackson then prepared for defense behind the Rodriguez Canal, which was dry at the time. On January 1, 1815, Maj. Gen. Sir Edward Pakenham brought on the Battle of New Orleans with an artillery attack against Jackson's position, but his guns were soon silenced.  On January 8, he launched infantry attacks on both sides of the river and a naval attack up the Mississippi against Fort St. Phillip. In the attack against Jackson's canal position, the 44th Regiment failed to bring forward the scaling ladders needed to enable the main attack to cross the canal. Nevertheless, Pakenham pressed the attack. It was made with great bravery but was repulsed with great loss. The naval attack also failed; the British succeeded on the left bank, but later retired. On January 18, 1815, the British withdrew completely and began operations against Mobile, only to learn that the Treaty of Ghent, ending the war, had been signed on December 24, 1814.  The unanimous ratification by the U.S. Senate of the Treaty of Ghent and the celebrations that followed cloaked the fact that the United States had achieved none of its objectives.  Contrary to American expectations, Canada remained British and eventually developed its own national identity, partly from pride over repulsing U.S. invasions. Meanwhile, Britain’s influence among the northwestern Indians was forever ended, and American expansion in that region proceeded unchecked. In the South, the Creek War opened a large part of that region for settlement and led to the events that persuaded Spain to cede Florida to the United States in 1821. 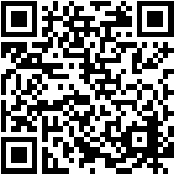