Battle of Fort Donelson :  In late January 1862 the 68th Ohio infantry  as part of  Gen Gran's ARMY OF THE TENNESSEE crossed the Ohio River into Kentucky at the mouth of the Tennessee River. Then move downs the Tennessee River to Fort Henry which had been taken by the Federal Navy on February 6, 1862.  From there they crossed the narrow country between the Tennessee River and Cumberland River to Fort Donelson.  The 68th Ohio moved up the Piney road, and set up a road block on that road just south of where Indian creed crossed the road.  After Grant blocked a Confederate attempt to break out, the Confederates  surrendered. 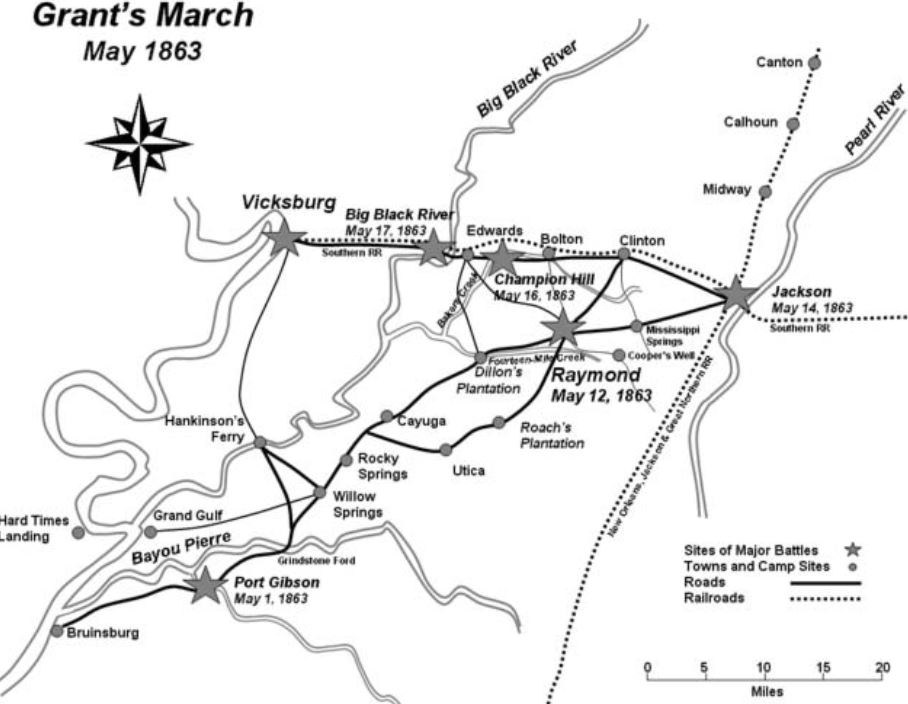 The Vicksburg Campaign:  The 68th Ohio was part of Leggett  Brigade,  Logan division, McPherson XVII corps.  On April 25 to 30 , 1863 Grant moved south on the west side of the Mississippi River.  Grant safely ferried his men across the river and landed at Bruinsburg Mississippi, Vicksburg.   Grant’s first objective was Port Gibson, a small village  ten miles inland with an important hub of roads leading to Vicksburg, Grand Gulf, and inland to Jackson.  By taking Port Gibson Grant had outflanked Grand Gulf and forced it's evacuation.   With the Confederates evacuated of Grand Gulf Grand, Grant moved his base from Bruinsburg to Grand Gulf.  Grant then began his march to Jackson.  Late in the morning of May 12,  McPherson's Corps reached Fourteen Mile Creek, two miles south of Raymond.  The Confederates with 3,000 troop thinking that this was a small force of Union troop advance across Fourteen Mile Creek to attack.  Gen McPherson send the 2nd Brigade (the 68th Ohio was part of 2nd Brigade) down an embankment up to the creek bank.   When the southern storm broke loose upon them, the Union troop lay down a heavy fire into the right wing of the advancing Confederates ,  and McPherson sent in more troops.  The Confederates finally realizes  they were heavily outnumbered and  withdrew.  Grant then moved his army toward Jackson, Mississippi.

Battle of Champion Hill: On the Morning of May 15 Grant left Jackson behind still in flames. Sherman’s corps remained in Jackson to destroy all military and public property beneficial to the Confederacy.  On May 16, 1863, moving west  Gen.  Grant’s advancing Union corps met Confederates in a fierce struggle roughly halfway between Jackson and Vicksburg. Confederates  Gen. Pemberton had posted his divisions on high ground in a 3-mile line covering the roads from the south and east. Unexpectedly Grant's men moved west along an undefended road and met the Confederated  at Champion's Hill.  McClernand  Corp on the Raymond road to the south and Gen McPherson to the north on the Jackson Road.  By 10:30 Gen. Leggett  Brigade deployed in the fields near Champion hill near the base of the hill and lay down to wait until the attack was to start.  The Confederate high upon the hill were firing down on the men. At this time the 68th Ohio about 500 yards south of what is now the Champion Hill Road.  Gen McPherson gave the word and Leggett  Brigade advanced around 11:30. 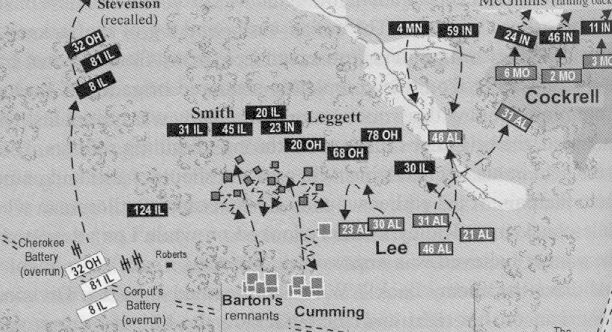 Around noon the 68th Ohio had advanced about 800 yard.  The 68th Ohio was attacking the 30th Alabama about 200 yards north of the Jackson road. The 68th Ohio had just crossed Bakers creek that runs though Champion hill.  It is around this time and in this part of the battle that Simeon was shot by a minie ball through the left leg.  Simeon lay wounded on the field, under a sheltering Mongolia tree urging his comrades to keep up the fight and not to take him back to the field hospital because it would remove two men strength from the battle.  At sun down Simeon was carried to the field hospital that was near the abandoned Champion farm-house and  his shattered left leg was amputated below the knee.  Grant who needed every man for the attack on Vicksburg left only enough men behind to take care of the wounded.   Ten days later the hospital and its patients fell into the hands of a Confederate Cavalry unit.  It was the practice of the day when a hospital was taken like this all of the patients sign paroles and the Confederate would then release then.  After the hospital was back in Union hands Simeon was taken to Memphis on June 24th where he remained until December when he was finally discharges. 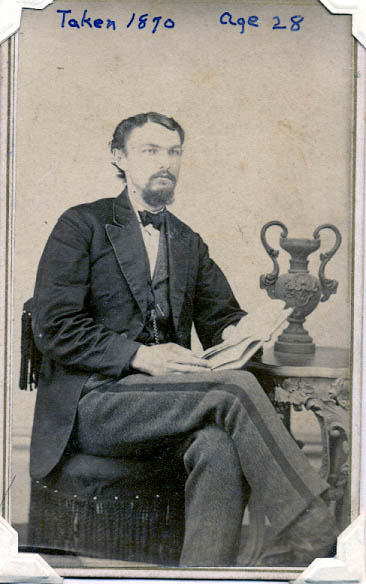 After his discharges Simeon returned to Williams County, Ohio.  Simeon was nominated and elected Auditor of Williams County, Ohio on the Republican ticket for three terms, from 1866 to 1872. From 1875 to 1877 he was in the saw-mill and lumber business.  Simeon married Myra Ball on July 7, 1870.  In 1877 he and Judge C. A. Bowersox bought the Bryan Press.  In 1888 Simeon Gillis was the editor and publisher of the Republican paper in Bryan.  In 1912 he became the Ohio Commander of the GAR (Grand Army of the Republic)  Simeon Gillis died on Saturday afternoon March 15th,, 1919.  Simeon had said that he did not want to be buried with that dam leg, so his son-in-law burn it.