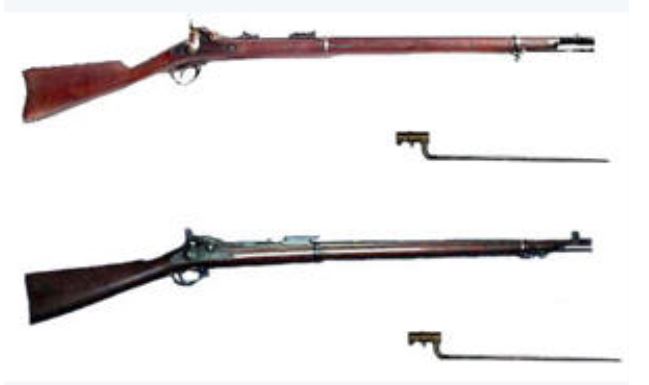 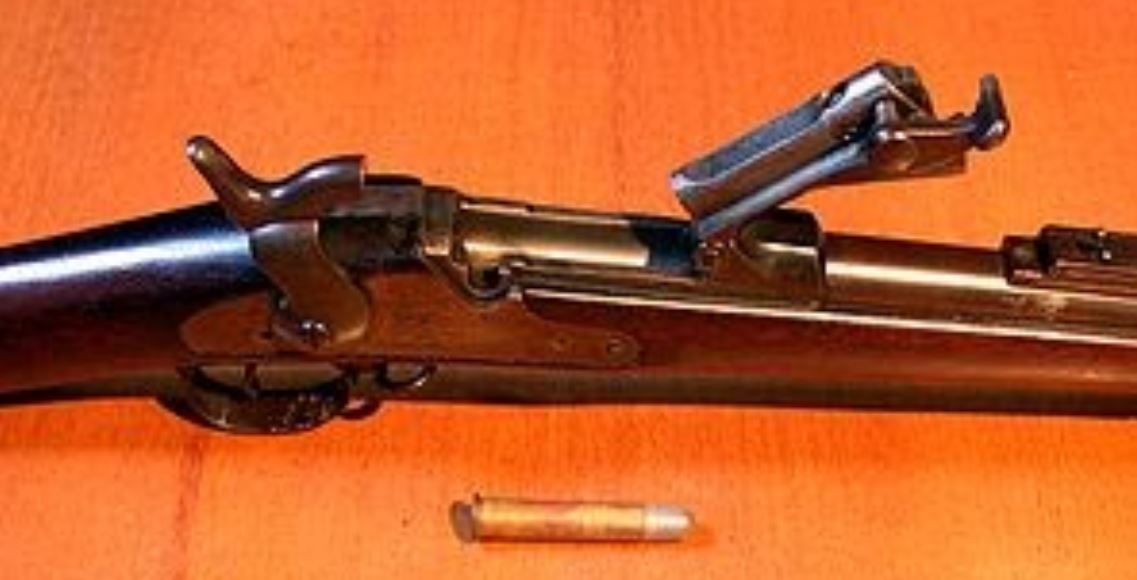 To replace the Army’s Civil War 1861 and 1863 muzzle loading rifle-muskets the Springfield Armory in 1873, perfected a forward-hinged breech block that swung open like a trapdoor, earning its everlasting nickname. Commensurate with this was the development of the .45-70 Gov’t cartridge, a rifle and ammunition combination literally made for each other.  Due to the carbine’s lighter weight and shorter barrel, reduced-load cartridges containing 55 grains of black powder were issued for it. Nonetheless, the carbine’s sights were optimistically calibrated to 800 yards.

Carbines were fitted with a stock-mounted bar and saddle ring, to be hooked to a leather sling worn diagonally across a trooper’s body, thus curtailing accidental loss from the saddle. Numerous changes were made to the carbine during its 20-year service in the Army, encompassing triggers, lock plates, breech blocks, stampings, hammers, and rear sights. Befitting military guns,  parts were interchangeable and today it is rare to find a trapdoor in “as-issued” condition. Plus, many rifles were made into faux-carbines in later years.  There were 60,912 carbines made from 1873 to 1893. Those with serial numbers below 43,700 are known as “Custer Guns,” as there is a possibility they saw action at the Little Big Horn, but easily swapped parts mean “buyer beware”—authenticated guns are rare. Nonetheless, values of any carbine in decent condition have risen dramatically in recent years.

Regular Spanish troops were mostly armed with modern charger-loaded 1893 7mm Spanish Mauser rifles and using smokeless powder. Other irregular troops were armed with Remington Rolling Block rifles using smokeless powder and brass-jacketed bullets. US regular infantry were armed with the 30–40 Krag–Jørgensen rifles which was a repeating bolt action rifle with a complex rotating magazine designed by the Norwegians Ole Herman Johannes Krag in the late 19th century. It was adopted as a standard arm by the United States of America. Both the US regular cavalry and the volunteer cavalry used smokeless ammunition. In later battles, state volunteers used the .45–70 Springfield a single-shot black powder rifle.

By 1890 the United States was lagging behind other industrialized nations in the development of a modern military rifle. Many of these nations had developed—or were in the process of developing—bolt-action, repeating rifles chambered for “reduced-caliber” smokeless-powder cartridges.  By contrast, the standard U.S. service arm at the time was still the single-shot, blackpowder .45-70 Gov’t “Trapdoor Springfield.”   In order to address this issue, the U.S. Army Ordnance Board appointed a “Magazine Gun Board” on Nov. 24, 1890 to “consider and recommend a suitable magazine system for rifles and carbines for the military service.”

The Board’s report and recommendations were finalized Aug. 20, 1892, which gave ample time for interested parties to submit examples for consideration. All of the rifles were required to be chambered for a .30-cal. smokeless-powder experimental cartridge developed by Frankford Arsenal. After the various rifles were thoroughly and exhaustively tested, the consensus was that the bolt-action Danish Krag-Jorgensen had won.

One of the Krag’s salient features was the horizontal box magazine and loading gate on the right side of the action/receiver that enabled it to be loaded and unloaded with the bolt open or closed.  Like many of the other repeating military rifles of the era, the Krag was fitted with a magazine cut-off that permitted it to function as a single-loader with the magazine held “in reserve” as required. The bolt locked by means of a single lug at the front. While not the strongest of actions, it was satisfactory given the pressures generated by the .30-cal. smokeless-powder cartridge. Bolt operation was exceptionally smooth, and the Krag soon gained a well-deserved reputation as one of the slickest bolt-action rifles of all time.  A Krag rifle is on display at the Veterans Museum.

The rifle was adopted as the “United States Magazine Rifle, Caliber .30, Model of 1892.” The rifle was 49.1 inches in overall length with a 30-inch barrel and weighed about 9.3 pounds without the bayonet or sling.  A one-piece cleaning rod was located under the barrel. The cartridge was designated as the “.30-40,” for its .30 cal. and 40 grains of smokeless propellant. The bullet weighed 220 grains, and the muzzle velocity was approximately 2,000 fps.

The first Model 1892 Krag rifles were completed by Springfield Armory on Jan. 1, 1894, and by October of that year sufficient numbers had been manufactured to permit limited issuance. To troops accustomed to the ponderous single-shot, smoke-belching, blackpowder .45-70 Gov’t Trapdoors, the trim new bolt-action .30-cal. repeating rifle was eagerly received. A cavalry carbine version of the Krag was envisioned, but delays in getting the rifle into production resulted in a carbine being put on hold and, other than two or three prototypes, no Model 1892 Krag carbines were fabricated.

By 1896, there were enough changes made in the original design to warrant a new designation, and the “United States Magazine Rifle, Caliber .30, Model of 1896” was adopted. Although the basic Krag action remained relatively unchanged, there were numerous modifications, including the elimination of the under-barrel cleaning rod in favor of a jointed three-piece rod carried in a buttstock recess, the strengthening of the stock, and an improvement to the rear sight—still lacking windage adjustment, however.

Soon after the Krag carbines were in service, they saw some use against the remaining renegade Apaches who still terrorized parts of Arizona and New Mexico throughout the late 1890s. During this period some Krag carbines were also carried by cavalry units patrolling Yellowstone Park to prevent game poaching.

The Krag’s first significant combat use occurred during the Spanish-American War of 1898 when Model 1892 Krag rifles, along with some of the newer Model 1896 rifles and carbines, were used by U.S. troops in Cuba. Because of a shortage of Krag rifles, most of the volunteer units that served in the conflict were armed with the old .45-70 Gov’t Trapdoors rifles.  Some of the volunteers noted sardonically that the “regulars,” who were paid to fight, had the new repeating Krag rifles while those who volunteered were stuck with obsolete single-shot guns. Nonetheless, the most famous volunteer outfit of the war, the 1st U.S. Volunteer Cavalry, better known as the “Rough Riders,” was armed with new Model 1896 Krag carbines. It is probable that the political influence of unit’s second-in-command, Lt. Col. Theodore Roosevelt, had something to do with the outfit being armed with the new bolt-action carbines rather than Trapdoors.

While the Krag acquitted itself reasonably well during the war, some deficiencies became apparent when it went up against the Model 1893 Mauser rifles used by the Spanish. The Mauser’s clip-loading capability was markedly superior to the Krag’s magazine design, which had to be loaded with individual cartridges.  Also, the Mauser’s stronger bolt-action mechanism enabled it to use higher-velocity cartridges having more power and better performance than the .30-40 Krag.  In addition to the fighting in Cuba, the Krag rifles also saw extensive use in the Philippine Islands, which the United States acquired after the Spanish-American War.  The Krag rifles provided valuable service in numerous small-scale, but brutal and bloody, combat actions against various indigenous insurgent groups.  The Krag rifles were also in the hands of U.S. Army troops who helped relieve the siege of the International Legation in Peking, China, during the so-called Boxer Rebellion in 1900. 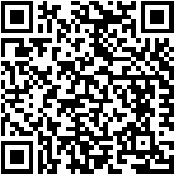