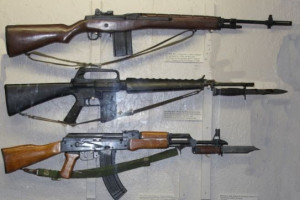 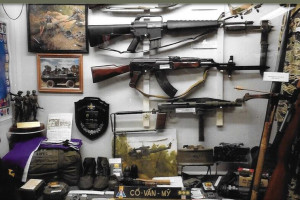 The Vietnam War was a Cold War-era military conflict that occurred in Vietnam, Laos, and Cambodia from 1 November 1955 to the fall of Saigon on 30 April 1975. This war followed the First Indochina War and was fought between North Vietnam, supported by its communist allies, and the government of South Vietnam, supported by the United States and other anti-communist nations. The Viet Cong, a lightly armed South Vietnamese communist-controlled common front largely fought a guerrilla war. 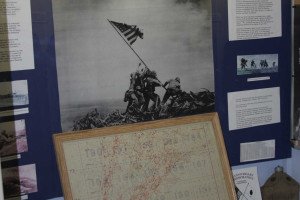 The Battle of Iwo Jima (19 February – 26 March 1945),  was a major battle in which the United States Armed Forces fought for and captured the island of Iwo Jima from the Japanese Empire. The American invasion had the goal of capturing the entire island, along with its three airfields (including the South Field and the Central Field), to provide a staging area for attacks on the Japanese main islands.[2] This five-week battle comprised some of the fiercest and bloodiest fighting of the War in the Pacific of World War II. 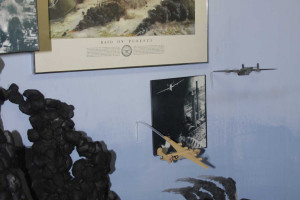 The Ploesti display shows the B24 raid on Ploesti, a vast complex of oil refinery facilities located north of Bucharest, Romania. On August 1, 1943, the U.S. launched 177 B-24 Liberator bombers from airfields in Benghazi to hit the Romanian oil refineries. Because the round-trip distance to the target and back was over 2,000 miles, no fighter escort was possible, and the bombers came in alone, at treetop level. Waiting for them were over 200 scrambled German fighters and a network of hundreds of 88-millimeter anti-aircraft guns. 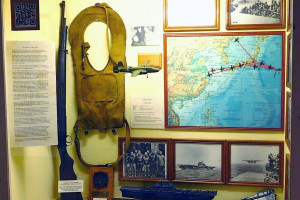 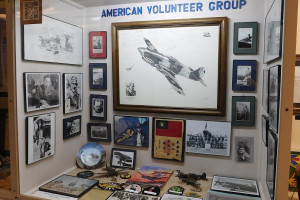 Flying Tigers was the popular name of the 1st American Volunteer Group (AVG) of the Chinese Air Force in 19411942. The pilots were United States Army, Navy, and Marine Corps personnel, recruited under Presidential sanction and commanded by Claire Lee Chennault; the ground crew and headquarters staff were likewise mostly recruited from the U.S. military, along with some civilians.  It trained in Burma before the American entry into World War II with the mission of defending China against Japanese forces. 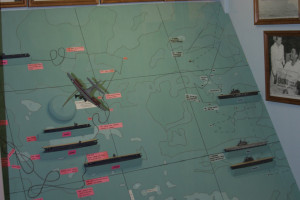 The Battle of Midway, June 3-7, 1942, is the most popularized naval battle of the Second World War. For good reason, It has generally been considered the most critical battle of the war in the Pacific. Before the battle the Japanese had not been decisively defeated at sea. After the American victory, the momentum of the Japanese offensive stalled. Following the war of attrition in the Solomon's on and around Guadalcanal, the American central Pacific counteroffensive began in the fall of 1943 at Tarawa. 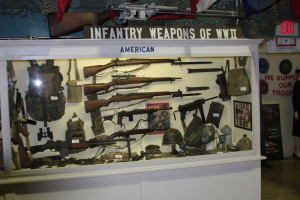 Included in the American Weapons of World War Two Display are the Thompson submachine gun, the M1 Garand, an early extremely rare developmental model M1 Garand known as the "gas trap" Garand, the M1 carbine and it's paratroop version, the Springfield 1903 bolt action rifle and its sniper variant, the M1911 pistol, the M3 Grease Gun and the BAR Browning Automatic Rifle. 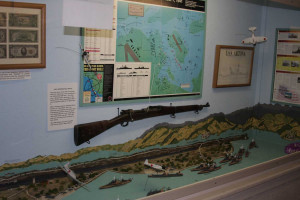 The attack on Pearl Harbor was a surprise military strike conducted by the Imperial Japanese Navy against the United States naval base at Pearl Harbor, Hawaii, on the morning of December 7, 1941 (December 8 in Japan). The attack was intended as a preventive action in order to keep the U.S. Pacific Fleet from interfering with military actions the Empire of Japan was planning in Southeast Asia against overseas territories of the United Kingdom, the Netherlands, and the United States. 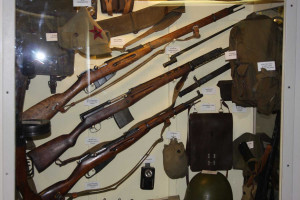 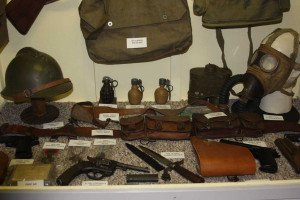 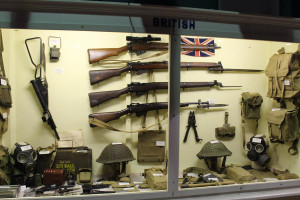 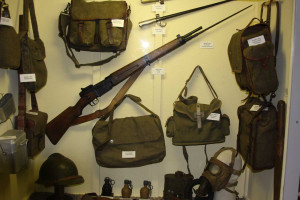 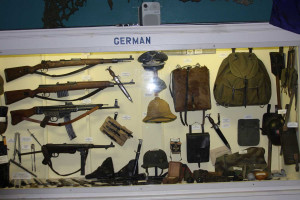 The German Weapons Display contains many small arms used by the German Military during World War Two. Included in the display are several well known German weapons including the 98K Rifle, the STG-44, the very successful MG42 Light Machine gun, the P08 Luger, MP40 machinepistol and the Walther PPK. There are also several lesser known weapons made in other countries by contract or aquired by occupation during the war. 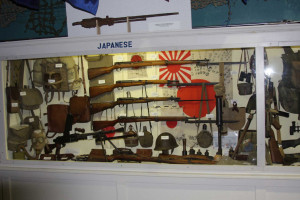 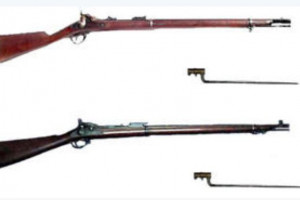 The .45 caliber trapdoor rifle would remain in use with the Regular Army until 1894 and with the National Guard in various states until at least 1905.   The .45 caliber Model 1884 carbine was replace in 1896 with a .30 caliber carbine version of the Krag-Jorgensen, although the trapdoor would continue to be used by the National Guard into the early part of the 20th century. The Model 1896 Krag-Jorgensen carbine was used by the cavalry of the Regular Army and the majority of Volunteer cavalry units during the Spanish-American War. 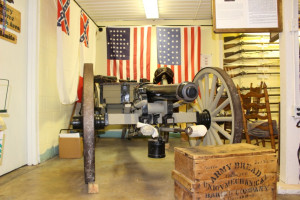 One of the most accurate artillery pieces in the Civil War was the Parrot Rifle. A former Army captain and West Point graduate named Robert Parker Parrott patented the process that allowed the production of this rifle in 1861. 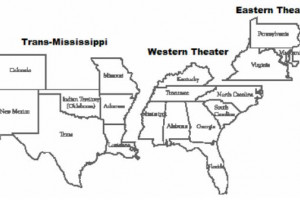 Union General Halleck was given command of the Western Theater.  In 1862 Union General Grant’s Army of the Tennessee was to take control of the Tennessee River while General Buell's Army of the Ohio was to move down from Cincinnati and take Nashville on the Cumberland River.  Flag Officer David Farragut led a Union assault up the Mississippi River. By April 25, he was in command of New Orleans. 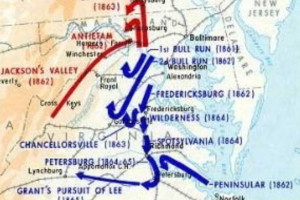 In the First Battle of Bull Run on July 21, 1861, 35,000 Confederate soldiers under the command of  “Stonewall” Jackson forced a greater number of Union forces (or Federals) to retreat towards Washington, D.C., dashing any hopes of a quick Union victory and leading Lincoln to call for 500,000 more recruits.  it became clear that the war would not be a limited or short conflict.  George B. McClellan replaced the aging General Winfield Scott as supreme commander of the Union Army after the first months of the war. 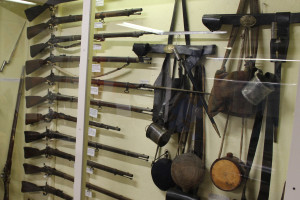 Smooth bore Muskets came in various bore diameters from .69 calibers to the British Brown Bess  at .75 calibers.  A round ball fired from a smooth barrel is fairly unstable and just not very accurate. Hitting a target over 50 or so yards becomes as much a matter of luck as skill.  The Rifle Musket  which was loaded at the front of the gun barrel.  Rifling the barrel of a musket and using a hollow-based conical bullet that expands when the bullet is fired causes the bullet to spin and greatly increases accuracy up to 300-400 yards. 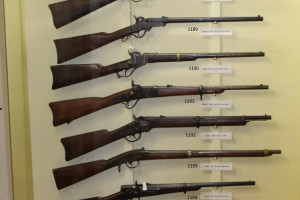 The difference between a Rifle and Carbine is the length of the barrel. The longer the barrel the greater was the accuracy. The Civil War is called the "first modern war" for many reasons; one of these reasons is because of breech-loading rifles.  Breech-loading rifles loaded their bullets at the back of the gun.   Using a breech-loading gun, ammunition could be loaded much faster and shots could be fired at the enemy much quicker. In addition, these rifles could have multiple bullets loaded into them at one time . 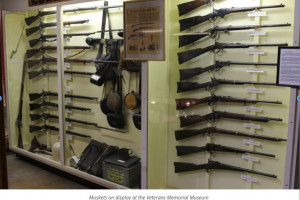 Smooth bore Muskets of the 1700’s Came in various bore diameters, from the French Charleville and early US military muskets at .69 calibers, to the British Brown Bess of nominal .75 calibers. The smooth-bore musket is accurate to maybe 50 yards when aimed. A round ball fired from a smooth barrel is fairly unstable and just not very accurate. Hitting a target over 50 or so yards becomes as much a matter of luck as skill. 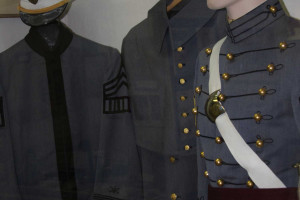 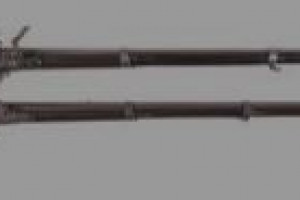 Flintlock muskets were the mainstay of European armies between 1660 and 1840.  A musket was a muzzle-loading smoothbore long gun that was loaded with a round lead ball  or a mixture of ball with several large shot (called buck and ball), and had an effective range of about 120 to 130 yards.  The beginning of the Mexican War coincided with a shift in the from the flintlock firing system to the much more reliable percussion cap ignition system.  Flintlock muskets were temperamental weapons and often failed to discharge 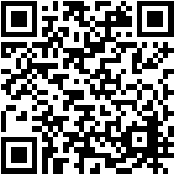